National Parks officials say Bakhtegan Lake has completely dried out due to a water shortage and decline in precipitation. 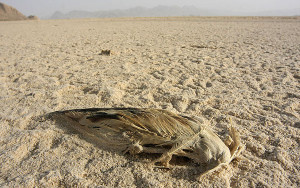 The Daneshjoo website reports that according to Bakhtegan National Park official Mohammad Jani: “The drying out of 120,000 hectares of lake has resulted in salt storms that cause skin, eye and lung problems for residents of Neyriz, Estehban, Kharameh and Arsanjan.”

Bakhtegan, located in Fars Province, used to be the habitat for flamingos, shelduck, egrets, ducks, pelicans and geese among other birds migrating from Siberia in winter.

Jani adds that the drying out of Bakhtegan Lake has led to a severe drop in the air’s water content, adversely affecting farmers who grow figs, almonds and olives in the region.

Salt blown from the area that used to be covered by the lake has also been destroying agricultural land in the region.