Sistan-Baluchistan is dealing with dust particles in the air at six times the accepted level, Iran’s meteorological organization reports. 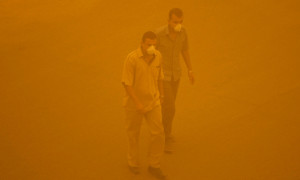 According to IRNA, the increase in suspended dust particles is the result of heavy winds in recent days.

The average wind speed in the past two days has reached 74 kilometres per hour and visibility has fallen to less than a thousand metres.

With the complete drying out of Lake Hamoon and continued drought in the region, dust storms have become more frequent in this southeastern Iranian province and forced many residents to leave their homes.

The health hazard from the increased density of dust particles has raised serious concerns, and some have referred to the “silent death” of the region’s residents due to declining air quality. The growing concentration of dust particles in the air has been linked to an increased risk of stroke.