After months of protest, prominent Iranian human rights lawyer Nasrin Sotoudeh has finally managed to reduce the suspension of her licence from three years to just nine months. 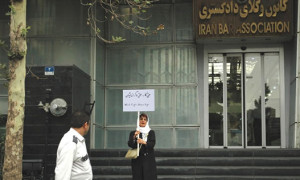 Sotoudeh’s Facebook page reports that because nine months have elapsed since the order was issued, she will be applying for her licence at the Bar Association in the next few days.

Nasrin Sotoudeh had been protesting in front of the Bar Association each day since last September, demanding her right to work.
Her protests coupled with a formal appeal of the sentence have finally led to a shorter suspension.

Sotoudeh was arrested in 2010 and sentenced to six years in jail and a 10-year ban from practicing law. She was released with the change in administration and the establishment of the Rohani government.