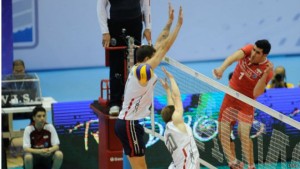 Iran now has 10 points, ranking third on the games chart. The Iranian team will have five more games in Tehran and then go on to the United States for its next match.

Friday’s game stirred controversies regarding the presence of female spectators in stadiums. Despite assurances from Hassan Rohani’s advisor on Women and Family Affairs, Shahindokht Molaverdi, that women would be allowed to watch the game in the stadium, last week the minister of the interior announced that the ban on women in stadiums is still in effect.

Extremist groups threatened violence if women approached stadiums and they staged a demonstration with about 100 people to bring their point home.
Khabar Online reported that a number of women with U.S. passports entered the stadium but were cheering for the Iranian team. The report included a snide mark that they might have been Italian (The Iranian and Italian flags have the same colours.)

ISNA reported that special police forces were heavily guarding the area and there were some problems when reporters wanted to enter the venue.

Meanwhile, Molaverdi slammed the ban on women in stadiums, questioning those who put all the “burden of the system’s Islamic content on the shoulders of women”. Molaverdi wrote on her Facebook page that until about two years ago, there were no restrictions on women’s presence in stadiums and she asked what has changed in the past two years that now makes it forbidden.

She adds that these actions are only meant to encourage public disillusionment in the administration. Analysts have often said that’s the goal behind the recent cancellation of concerts and extreme reactions toward attempts to let women watch sports events in stadiums.

Meanwhile, the Rohani administration has so far chosen to retreat in the face of attacks from extremist groups.