A crowd of fewer than 100 people gathered in protest on Wednesday to express opposition to the presence of female spectators in sports stadiums, as the Iranian and U.S. teams prepare to meet one another on Friday June 19 as part of the 2015 Fédération Internationale de Volleyball (FIVB) in Tehran. 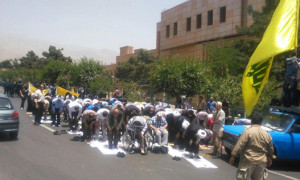 IRNA reports that the gathering was held, without a permit from the interior ministry, in front of the Ministry of Youth Affairs and Sports.
The group chanted slogans such as “death to opponents of the Velayat-e Faqih (leadership of the clergy)”.

The protesters held prayers on the street and said those who claim that a directive has been issued to allow women in stadiums must be prosecuted.

In recent weeks, the Iranian president’s adviser on Women and Family Affairs has stated that women will now be allowed to attend sports events in stadiums because a directive has been signed and issued.

That announcement was contradicted by a statement from the minister of the interior, who said there has been no change in the ban on female spectators in stadiums.