UNESCO has spoken out against the Saudi-led coalition’s bombing of Sanaa and the resulting “severe damage” caused to heritage sites in Yemen’s capital. 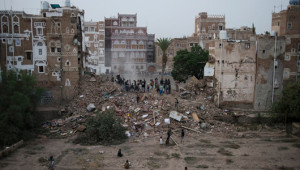 This week, UNESCO chief Irina Bukova referred to the bombings, saying: “I condemn this destruction and I call on all parties to keep cultural heritage out of the conflict.”

The airstrikes on Yemen by the Saudi-led forces began in March and have intensified in recent weeks.

Saudi Arabia, in an attempt to restore exiled Yemeni president Mansour Hadi, is attacking Houthi forces that have taken over the capital and large parts of the country.

The UNESCO chief reports that the archaeological site of the pre-Islamic walled city of Baraqish and the old city of Saada have sustained severe damage.

Bukova said: “In addition to causing terrible human suffering, these attacks are destroying Yemen’s unique cultural heritage, which is the repository of people’s identity, history and memory and an exceptional testimony to the achievements of the Islamic Civilization.”