Demonstrations in the works by opponents of the nuclear negotiations in Mashhad have been declared illegal by the Khorasan Razavi governor. 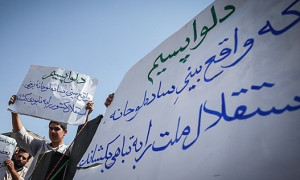 Massoud Mahalati told ISNA that without obtaining a permit, the organizers have put up flyers and issued invitations through social media. “It is not even clear who is organizing these demonstrations,” Mahalati said.
In recent days, a rally call with a red sign saying “We will not permit it!” has been circulating on social media. Similar fliers have been put up on walls across the city of Mashhad. The rally is supposed to take place at 5 PM local time on Thursday May 28, purportedly to protest against the “humiliation of the people of Iran by and the excesses of the 5+1”.

The rally call states that it has taken its cue from the latest statements from Iran’s Supreme Leader, who has referred to demands by the 5+1 to inspect Iran’s military facilities as excessive.

The new round of talks began on Wednesday May 27 in Vienna and the parties are aiming to have a final draft of the agreement by the end of June.

Syria, Iran, ISIS and the Future of Social Justice: “In dialogue with Yassin al-Haj Saleh”