Mostafa Tajzadeh, a prominent political prisoner and former deputy interior minister, was not released at the end of his six-year sentence and has to serve another sentence. 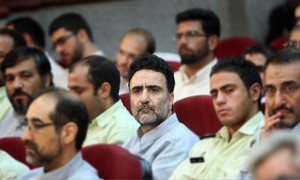 Fakhrosadat Mohtashamipour, Tajzadeh’s wife, wrote on her Facebook page that while her husband’s six-year sentence has ended, he will have to endure another year of solitary confinement.

Tajzadeh has written on several occasions to Iran’s Supreme Leader to criticize his policies and decisions. The letters triggered complaints filed by the Revolutionary Guards and charges were brought against him for propaganda against the regime. He was then sentenced in absentia in a closed court to another year in jail.

Tajzadeh, an executive member of two reformist organizations, the Islamic Iran Participation Front and the Mujahedin of the Revolution, was arrested during the election protests of 2009 and sentenced to six years in jail. He has spent his term in isolation without any contact with other prisoners.