The Saudi-led coalition has resumed air strikes on Yemen, bombing Adan on the night of Sunday night May 17. The air strikes were halted for five days to allow delivery of humanitarian aid to civilians. 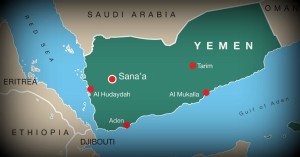 The ceasefire expired at 11 AM local time on Sunday and air strikes were carried out on Houthi bases.

Meanwhile, a three-day conference is underway in Riyadh regarding the situation in Yemen. Hundreds of Yemeni politicians, including Mansour Hadi and representatives of local tribes, are discussing the possibility of peace. A number of groups linked to former Yemeni president Ali Abdollah Saleh are participating in the conference; however, the Houthis have boycotted the talks because they had called for the UN to lead the talks and not Riyadh.

The U.S. representative in Riyadh had called for a renewal of the ceasefire for further delivery of humanitarian aid.

Iran has meanwhile announced that the ship Iran Shahed carrying humanitarian aid has reached the Gulf of Adan and will arrive at the Port of Adan on Thursday May 21. Saudi Arabia has accused Iran of delivering weapons to Houthis under the guise of humanitarian aid; Iran had denied those allegations.