One female allowed into stadium to watch Iranian soccer favourites

There was only one female spectator in Azadi Stadium for the 80th match-up between Iran’s two most popular soccer teams, Persepolis and Esteghlal, and she was a documentary filmmaker attending the game in connection with her work. 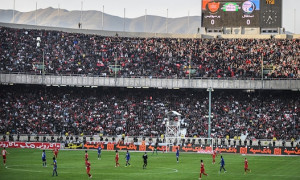 The game received increased attention in the media, however, for once again highlighting the ban on female spectators in stadiums.

The Tasnim News Agency reports that only one woman was allowed to enter the stadium and she was carrying official permission.

The report indicates that the unnamed female filmmaker is in the process of making a film for the Channel Three national television network.

The filmmaker told Tasnim that she passed through every door without a problem by showing her permit letter; however, she added that when she approached the field, she was told to return to the area designated for journalists. Iranian women’s rights activists have tried hard to end the ban on female spectators in sports stadiums, but despite support from the Rohani administration, hardliners in the regime have been unwilling to compromise.

Detained journalist gets to see lawyer after 10-month wait