After seven weeks of air strikes on Yemen by the Saudi-led coalition, a five-day ceasefire allowed the first shipment of humanitarian aid to reach Yemeni territory on Wednesday May 13. 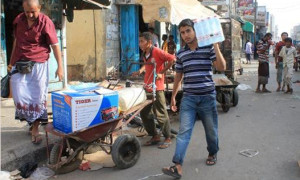 AFP reports that fuel, medicine, food and medical supplies are needed as the local economy is crumbling.

A spokesperson for the International Committee of the Red Cross, Sitara Jabeen, told Reuters the runway at Sanaa airport, which was bombed last month, needs to be repaired in order to allow large cargo planes to deliver humanitarian supplies.

Iran has announced that its ships carrying humanitarian aid for Yemen are headed for Hadida. The U.S. has called on Iran to deliver its aid through the United Nations.

An Iranian foreign ministry spokeswoman said today that Iran will not allow states involved in the attack on Yemen to inspect Iran’s shipments of humanitarian aid to that country.

The Saudi-led coalition has been bombing Yemen since March 26, and the five-day ceasefire that began last night appears to have been respected by both sides so far.

The World Health Organization reports that since the beginning of the conflict, more than 1,500 people have been killed and more than 6,500 have been wounded.