A number of Iranian shareholders gathered in front of the Tehran Stock Exchange on Monday to protest the investment losses they have suffered due to a steep fall in share prices. 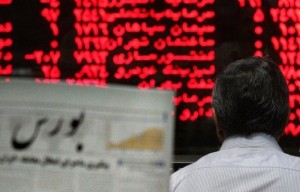 The Fars News agency reports that 50 to 70 investors gathered in front of the Stock Exchange on Hafez Avenue on Monday May 11, complaining that their investments shrunk by half over the past year.

The lack of certainty regarding the country’s economy and its future prospects as well as falling oil prices and the ambiguity of the nuclear negotiations have led to a weak stock market in the past 12 months. Some shareholders blame the government and stock exchange managers for encouraging them to invest in the market and yet failing to provide them with adequate information. They are also protesting the lack of transparency around the reversal of a number of trades.

The government has cut interest rates in the hope it would encourage further investment in stocks, but rather than recovering, shares have fallen even further in recent weeks.