A number of Iranian MPs have drafted a bill aimed at ending the nuclear negotiations with world powers. 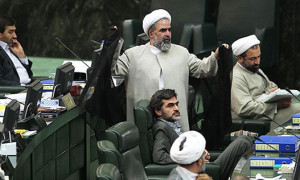 Mehdi Kouchakzadeh, a member of the Stability Front, told the Khaneh Mellat News Agency that the bill is entitled “Preventing the Imposition of Humiliation on the Great and Honest People of Islamic Iran”. The Stability Front is home to the most vocal critics of the Rohani administration.

Last week in a meeting with teachers, Iran’s Supreme Leader referred to the ongoing talks, saying he will not accept negotiations that take place under threats and humiliation.

The MPs state that their initiative is based on this statement from the leader.

The bill will be put to a vote in Parliament on Sunday.

The Rohani administration has not yet made any comments regarding this bill.

The nuclear negotiations, which are supposed to yield a final comprehensive agreement by the end of June, are becoming more complex, with both the U.S. congress and the Iranian Parliament trying to claim more of a say in how they proceed.