The screening of Tales, the latest film by Rakhshan Bani Etemad, has drawn fire from Iran’s Revolutionary Guards Corps (IRGC) who called it “celebrations of seditionists”. 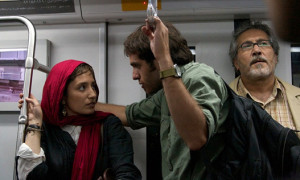 Iranian hardliners refer to the challengers of the 2009 election results and the election protesters as “seditionists”.

The Javan daily reported on Thursday May 7 that the screening of Tales is an attempt by the Ministry of Culture and Guidance to break certain taboos and begin releasing a number of films currently shelved for their “inappropriate content”.

The Javan daily is closely linked to the IRGC. While the IRGC is a military organization, it has spread its influence in recent decades into economic, political and cultural arenas.

The daily states that culture minister Ali Jannati is “ineffective” in enforcing the “red lines” in film screening and stresses that films about the “sedition of 2009” are behind that red line.

Rakhsahn Bani Etemad’s Tales depicts domestic violence, unemployment and addiction as relevant social concerns in Iran today. It revisits characters from Bani Etemad’s previous films and depicts the upheavals in their lives in view of the many social changes in the country’s recent history.