Four sentenced to death for murder of Fakhondeh

A court in Kabul found four men involved in the murder of Farkhondeh guilty and sentenced them to death on Wednesday May 6, 2015. 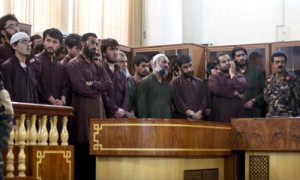 AFP reports that Zeinalabedin, Mohammad Yaghoub, Mohammad Sharif and Abdol Bashir were brought before the court on May 2.

The court also sentenced another eight people involved in the incident to 16 years in jail and acquitted another 18 who had also been charged.

One of the people condemned to death is a religious man who sold prayers near the mosque where the incident took place and is said to have instigated the attack on Farkhondeh.

The 27-year-old woman was beaten to death by the group on March 19 in Kabul and then her remain were burned, because the religious man had falsely accused her of burning the Quran and insulting sanctities.

The court proceedings were televised all across Afghanistan. Forty-nine people have been charged in connection with this matter. In addition to the 30 dealt with today, 19 police officers will stand trial for it on Sunday. The officers are accused of being present at the scene and making no effort to save Farkhondeh.

The murder of Farkhondeh was severely condemned by President Ashraf Ghani and even by Taliban leaders in Afghanistan and it triggered many demonstrations demanding justice for Farkhondeh.