Police clashed with demonstrators trying to mark May Day in Istanbul and kept them from gathering in Taksim Square. 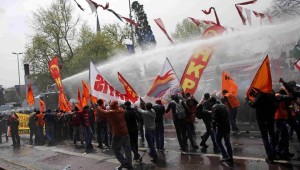 The International Workers Day gathering began as a peaceful demonstration.

Reports indicate that Turkish police met demonstrators with tear gas and water hoses for defying the ban on protests in the city’s central square.

Turkish media report that 10,000 police officers were deployed to deal with May Day demonstrators and at least 136 protesters have been detained so far.

Wary of anti-government protests, Turkish Prime Minister Recep Tayyip Erdogan had warned the public to give up any plans to gather in Taksim Square.

Unions defied the ban on gathering in Taksim Square and issued a joint statement on Wednesday, saying: “We will be in Taksim despite the irrational and illegal ban. All roads will lead to Taksim on May Day”.

Iranian workers march on May Day despite state resistance