Hassan Khomenei, a prominent figure in Iran’s reformist camp, says threats like the one issued by Ansar-e Hezbollah would not have dissuaded him from giving a speech in Golestan Province, had he had any plans to do so. 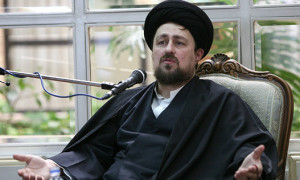 Hassan Khomeini, the grandson of the late leader of the Islamic Republic, Ayatollah Khomeini, and Ali Akbar Nateq Nouri were threatened yesterday by the conservative group Ansar-e Hezbollah in Golestan that they should cancel any plans to give public speeches in that province or be forced out.

Hassan Khomeini said on the Jamaran website that he is not scheduled for a trip to Golestan but had he had such plans, he would not cancel them over such threats. He added: “The people will eventually put such sparse extremist groups in their place.”

The Shargh newspaper reported on Wednesday April 22 that Ansar-e Hezbollah in Golestan has warned that should Khomeini and Nateq Nouri want to give a speech in Golestan, they will face the same fate as Ali Motahari in Shiraz.

Motahari, an outspoken MP, was attacked by a mob upon arriving in Shiraz in March to give a speech at Shiraz University. Motahari was not given a chance to give his speech.

Threats against reformist and moderate figures have increased in anticipation of parliamentary elections next March.