The Saudi-led regional coalition has announced an end to its air strikes on Yemen on Tuesday night, April 21, adding that its operations in Yemen will now focus on politics. 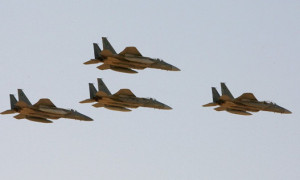 Saudi Arabia says the air strikes have managed to “successfully remove threats to Saudi Arabia’s security and that of neighbouring countries”. The German News Agency reports that the operation will end at midnight local time.

Al-Arabiah, which is linked to Saudi Arabia, reported that the coalition led by Riyadh will now focus on security issues, the fight against terrorism, providing aid and finding a political solution.

Saudi spokesman Brigadier General Ahmed Asseri says: “With [the bombardment] ended, the new Operation Restoring Hope begins with the following goals: continuing to protect civilians, continuing to fight terrorism and continuing to facilitate the evacuation of foreign nationals and to intensify relief and medical assistance to the Yemeni people.”

He added, however, that “the coalition will continue to prevent the Houthi militias from moving or undertaking any operations inside Yemen”.
The air strikes against Yemen began on March 26.

Iranian deputy foreign minister Amir Hossein Amir Abdollahian had expressed optimism earlier today that the military actions against Yemen would soon end due to continuing efforts to find a diplomatic solution to the crisis in Yemen.