Once again, asylum seekers leaving Africa for Europe have met with catastrophe in Mediterranean waters, with 700 lives claimed by the sea and only 28 surviving. 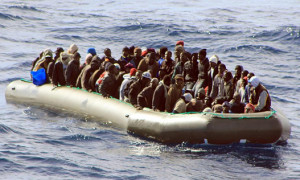 A spokesperson for the UN refugee agency (UNHCR) reported on Sunday April 19 that a boat met with trouble 110 km off the Libyan coast.

The Times of Malta reported that the 28 survivors were rescued by a commercial Portuguese ship that called for rescue forces. The Italian navy and coast guard then arrived at the scene south of Lampedusa.

In recent weeks, about 11,000 asylum seekers have managed to get themselves to Italy, and the Italian coast guard has been on the alert as improved weather has led more asylum seekers to brave the waters in precarious boats.

Four days ago, another boat carrying refugees capsized and 400 asylum seekers were drowned, with only 150 rescued by the Italian coast guard.

The mayor of Lampedusa has criticized the Italian government’s decision to cancel the navy mission Mare Nostrum, which made the country’s navy responsible for rescuing asylum seekers in international waters. Now rescue operations in the region are more restricted and caused delays for rescue forces in reaching the scene of an accident.

Guisi Nicolini, the mayor of Lampedusa, says the new rescue policies are “inhuman” and Amnesty International has also spoken out against them.