Saudi Arabia has rejected Iran’s call for an end to air attacks on Yemen by the Saudi-led coalition, saying Iran should stop meddling in Yemen’s internal affairs. 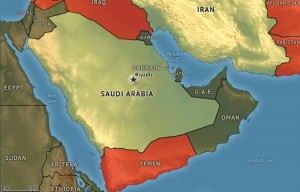 Saudi Foreign Minister Saud al-Faisel, at a meeting in Riyadh with French Foreign Minister Laurent Fabius, said: “What justifies Iran’s request for us to stop our operations in Yemen?… We have gone to Yemen to assist the legitimate government of that country. Iran is not in charge of Yemen’s affairs.”

Saudi Arabia accuses Iran of supporting the Houthi militia that have been fighting against the central government of President Saleh, who has fled to Riyadh.

Iran denies extending any support to Houthis, who have been advancing in recent months and taking control of large areas of the country.

Iran’s Supreme Leader has severely criticized the Saudi air strikes on Yemen and accused the country of “criminal actions and genocide”.

The Saudi attacks began two weeks ago and have continued to date.

France has aligned itself with Saudi Arabia and the coalition forces in their operation in Yemen.