Hundreds of Iranian protesters gathered in front of the Saudi Embassy in Tehran on Saturday April 11 following a rally call on social media to protest against the “sexual assault of two Iranian teenagers” at Jeddah Airport. 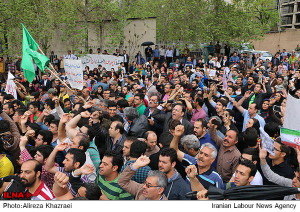 On Monday April 6, Iran’s foreign ministry announced that during the second week of Norooz holidays, during the inspection of an Iranian pilgrim caravan at Jeddah airport, officials separated two teenage boys from their group, saying they had to be searched further, and subjected them to sexual assault.

Deputy Foreign Minister Hassan Qashqavi announced that his office has delivered Iran’s “severe protests to this abominable act” and expects Riyadh to punish the perpetrators.”

IRNA reports that more than 500 people gathered in front of the Saudi embassy to call for the closure of the embassy and the cancellation of pilgrimage caravans to Saudi Arabia.

Iranian relations with Saudi are already severely strained over the situation in Yemen, especially since Iranian Supreme Leader Ayatollah Khamenei described the Saudi bombardment of Yemen as a “crime”.

Iran’s foreign minister has announced that Iran is prepared to assist in the establishment of a widely inclusive coalition government in Yemen.