Four hundred workers at the Jahan Vegetable Oil company who have been demonstrating in front of its factory took their protest to the governor’s office on Tuesday April 7, after they failed to get management to respond to their demands. 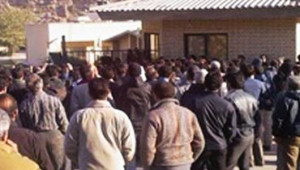 IRNA reports that the workers have gathered in protest in front of the Zanjan governor’s office, claiming management has been refusing to pay their overtime pay, refusing to give them a copy of their work contracts and forcing workers to sign one-month contracts. Workers maintain that all of these actions violate labour legislation.

The workers report that management has fired 183 workers in the past two years and reduced production from 430 tonnes per year to 92 tonnes with a reduced workforce of 52 employees.

The Jahan Vegetable Oil company has been shut down since last Monday due to the labour protests.

The company was established in 1955 by Qazanfar Bros., but after the Revolution in 1984, the Mostazafin Foundation took possession of the highly profitable business. Since then it has changed hands and expanded and in 2013 it was acquired by Kaf & Darogar Holdings, which appointed a new board of directors.

The workers say they have to stage protests each month in order to receive their monthly wages.