Two days after the announcement of consensus among nuclear negotiators in Lausanne, a spokesman for the National Security and Foreign Policy Commission of Iran’s Parliament announced that Foreign Minister Mohammad Javad Zarif has been invited to “offer a number of explanations about the Lausanne statement”. 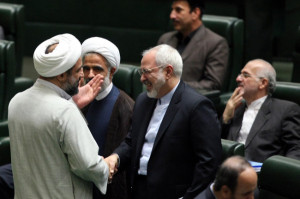 The Tasnim News Agency reported on Saturday April 4 that a date has not yet been set for the foreign minister to attend Parliament.

A number of MPs have been critical of the announcements regarding the framework agreement in Lausanne.

Mohammad Hossein Asferi, a member of the National Security Commission, has been quoted as saying that the announcement “was not in accordance with the determined framework and the red lines of the regime. We hope the negotiators have not been deceived.”

However, another commission member, Avaz Heydarpour, has referred to the Lausanne statement as “a win-win” for the parties.

Meanwhile, the Keyhan daily has condemned the Lausanne announcement, saying Iran has lost in this situation and the other parties have gained all they wanted.

Iran’s Supreme Leader has not spoken directly about the recent developments in the nuclear talks; however, many Friday mass Imams, who are all appointed by him, have expressed support for the framework agreement reached so far.

Tehran MP Ali Motahari has referred to the Lausanne statement as “the beginning of a new phase in the Islamic Revolutions” and spoke of “economic prosperity” and a new “place for the Islamic Republic in the world”.

Meanwhile, people have been celebrating on the streets in many Iranian cities and expressing support for the foreign minister and the negotiating team.

Ministry denies rules have changed to let women in stadiums