Iran’s Ministry of Sports has announced that its proposed plan to allow “women and families” into a number of stadiums has been approved by the National Security Council. 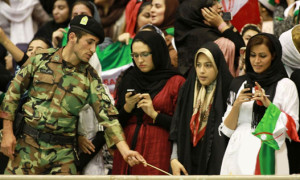 Iranian women are not allowed to enter many stadiums, and signs of “Women Not Allowed” are posted at stadium entrances.

IRNA reports that the Ministry of Sports has taken initiative in preparing a new directive to allow families and women in stadiums and managed to get it approved by the National Security Council.

Abdolhamid Ahmadi told IRNA that the directive contains a “series of cultural, social and Sharia considerations. And in some sports disciplines, families do not seek to attend nor is there a possibility to make such accommodations, because some sports are for men.” Ahmadi did not identify these disciplines.

There has been widespread pressure on Iranian authorities, both through domestic protests and international criticism, to allow women into sports stadiums.

Last June, a group of Iranian women seeking entrance to a stadium to watch a men’s volleyball match were briefly arrested. Ghoncheh Qavami, one of the detainees, was later rearrested and was only released in November on bail.

Iran failed to be selected as host of the International Volleyball Championship, while FIFA chief Sepp Blater has called on Iranian authorities on several occasions to end the ban on women in stadiums.

President Rohani’s deputy for women’s affairs, Shahindokht Molaverdi, has also spoken out against the ban, referring to Article Three of the constitution to justify Iranian women’s right to watch games in stadiums.

Iranians take to the streets to cheer nuclear consensus