The nuclear negotiations between Iran and the 5+1 in Lausanne went into their eighth day with two issues still under contention: the lifting of sanctions and the research and development of new centrifuges. The last meeting between John Kerry and Mohammad Javad Zarif and the other ministers and representatives began at 1 AM on Thursday and continued until 6 AM local time. 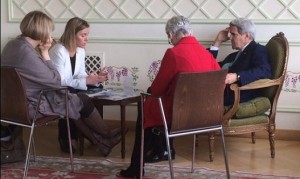 IRNA reports that the Iranian foreign minister told reporters that he is looking forward to returning to Tehran tomorrow, adding: “We have had significant progress but have not yet reached the end point.” He added that he hopes that discussions proceed well and they can make an official statement to the press by the end of the day.

Zarif stated that there is much optimism about reaching common solutions: “There is no possibility of reaching the comprehensive agreement in this round of talks and the result of the negotiations will have to wait until June.”

The parties have set June 30 at the final deadline for reaching a comprehensive deal to resolve the nuclear disputes.