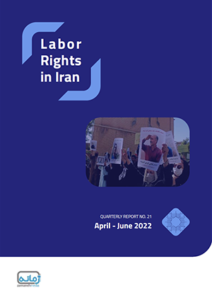 According to the Statistics Center of Iran, the official inflation rate reached 39.3% in May. Inflation reached 65.7% for bread and cereals, 41.7% for dairy products, chicken, and eggs, and 74.2% for fruits and vegetables. In this reporting period, the Iranian currency plunged in value even further. One U.S. dollar was exchanged for an average of 33,000 tomans. The currency depreciation and the ongoing war in Ukraine have already increased food prices in Iran and

The removal of food product subsidies caused protests in several cities. On May 5, people took to the streets in the cities of Khuzestan Province. The scope of the protests expanded a week later and reached the provinces of Chaharmahal and Bakhtiari, Lorestan, Kohgiluyeh, Boyer-Ahmad, and Isfahan. At least six people were killed during the protests, which continued sporadically until May 17.

Teachers gathered in over 200 cities and districts on April 21 to protest. On May 1, International Labor Day, the Coordinating Council of Teachers’ Trade Unions called on the teachers, workers, and students’ families to protest in all cities. One day before the rallies, the security officers arrested several trade union activists in Tehran and Kurdistan and threatened many others with phone calls to prevent the nationwide movement. Despite security measures, these gatherings took place across the country. On May 12, the teachers rallied for the third time in one month. On May 8, the teachers of Kurdistan Province staged a sit-in protesting the arrests of their colleagues.

After the second nationwide gathering of teachers on May 12, security forces arrested many union members in the cities of Ahvaz, Najaf Abad, Shiraz, Tehran, Marivan, Yazd, Yasuj, Mashhad, Arak, and several other cities. The detention of teachers continued until late June, as of the time of publication.

Government print media and state television reported on this topic The Ministries of Information, Education, and the Judiciary jointly accused the teacher and union activists of abusing the educators’ demands and trying to “create chaos,” threatening the detainees with “judicial action.”

The Tehran Bus Company drivers went on strike on May 16 and 17, protesting the company’s non-implementation of the 2022 Supreme Labor Council (SLC) resolution on the minimum wage. Instead of implementing the SLC’s directive, the Tehran Bus Company calculated the drivers’ wages based on what the parliament passed, which allowed only a 10% salary increase for public sector employees.

A few days before this strike, the security forces arrested Reza Shahabi, a terminated employee and member of the workers’ union board of directors. On June 12, after his detention was extended for another month, Shahabi announced that he would go on a hunger strike in prison.

During the two-day strike, over 20 employees were arrested. A few were quickly released and ten were taken to prison and released on bail in the following days.

In response to the labor movement’s progress in Iran, the government has started suppressing labor organizations and union activists. The Syndicate of Workers of Tehran and Suburbs Bus Company (SWTSBC), teachers’ unions, the Coordinating Committee for the Establishment of Labor Organizations, and the Free Union of Iranian Workers were among the labor organizations attacked by the media branches of the security agencies. The security forces also arrested some of their members.

This spring, security forces arrested at least 93 teachers in different cities. While some of these teachers were released on bail, at least 19 of them are still in custody and under interrogation. Additionally, at least 51 current retired teachers were summoned to either security or judicial institutions and interrogated or tried. The judiciary also sentenced some teachers to prison, imposed travel bans, administered fines, and suspended prison terms.