Zamaneh Media Publishes: In the Middle, on the Edge, a book on Iran’s Middle Class Poor

Zamaneh Media, announces the publication of the book In the Middle, on the Edge: Essays on Iran’s Middle Class Poor which includes articles on the spectrum of Iranian middle class that is becoming poor or is at risk of falling below the poverty line. This book offers both theoretical and empirical discussions on the issue of class structure in Iran in the past ten years and how the problem of poverty in Iran is now an aspect of middle class life.

Download In the Middle, on the Edge: Essays on Iran’s Middle Class Poor from here: 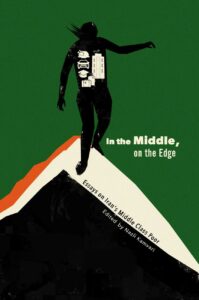 The subject of the impoverished strata of the middle class, or as it is commonly called, the Middle Class Poor, has been raised directly and indirectly in many economic and social studies. Asef Bayat, an Iranian sociologist, has used this concept to explain social movements in the Middle East, and his research has led others to pay special attention to this sector in explaining social dynamics in the region.

Following on the previous productions of knowledge, this book places strata of the poorer middle class in Iran at the center of a social query and asks why are they pushed into such a situation? Which sector of society do they form now? How has their lifestyle changed? What prospects do they envision for themselves? How do they make their demands? How do they resist and protest? How do the youth of this sector view their lives and destinies?

Parviz Sedaghat, in his essay titled “The Expansion and Contraction of the Middle Class in Iran,” investigates the role of the middle class in the class configuration of Iranian society.

The subject of Mohammad Maljoo’s essay titled “More Consumption, Less Satisfaction” is the dissatisfaction of the middle class with the standard of living in Iran.

“The Effects of the Islamic Republic of Iran’s Nuclear Dreams on the Country’s Middle Class” is the title of Bahman Ebrahimi’s essay.
Maryam Ghahremani, in her essay “Lost Time,” addresses the unemployment crisis among university graduates.

Iman Ganji, in his essay “ Slums and the ‘Invisible’ Populations of Neoliberalism,” looks at the category of the Middle Class Poor from the perspective of urban marginality.

Bijan Farzaneh in the essay “A Brand New “Dangerous Class?” addresses protests of this class which has irreversibly changed the political discourse in Iran.

Media Khanlari in her essay entitled “Kurdish Identity and Class Degradation,” writes on the intersection of class and ethnicity among the service workers in the ethnic minority city of Sanandaj.

Nazli Kamvari in her essay “Affective Acts of Speech in the Online and Offline Campaigns against Honor Killing, Sexual Assault, and Compulsory Hijab,” looks at initiatives and movements of women in this class stratum.

Omid Mehregan, in his essay “Open Images of a Closure,” examines the representation of the life of the middle strata in Iranian cinema of the last decade.

Yekta Sarkhosh in the essay “The Middle Class and the Drug Crisis in Iran” looks at how many drug users in Iran come from younger middle classes and the Middle Class Poor and relates this to the growing economic hardships.

The essays in this collection, while analyzing their topics, point to the lack of field studies and accurate statistics about social classes in Iran, and we like to draw attention to these shortcomings as well.

Zamaneh Media published the Persian manuscript of this book earlier. Download the Persian Manuscript from here or read more about it here.