Zamaneh Media’s 18th Labor Rights Quarterly Report is ready for download and covers news and analysis about the economic conditions, protests and strikes, and union activities of Iranian workers, teachers, nurses, migrant workers, Kulbars and more in the period of from July through September 2021. 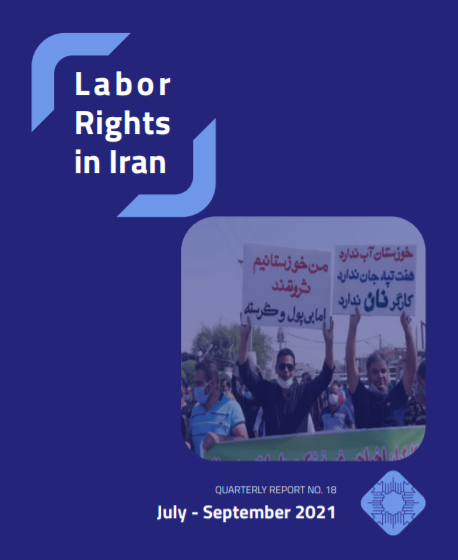 The continuation of the economic recession and the government budget deficit, which, according to MPs, may reach 400,000 billion tomans (400 trillion tomans), has caused delays in the payment of salaries to government employees and retirees covered by state pension and social security funds

Massoud Mirkazemi, head of the Program and Budget Organization, acknowledged the budget deficit and the government’s inability to pay the salaries of government employees. Delays in the payment of wages has doubled the pressure on workers and Many municipal employees have not been paid for between 1-14 months including railway maintenance workers, Khuzestan water and sewage workers, nurses and medical staff of many hospitals, Shafa-Roud dam workers, workers of Tehran’s Metro and rural telecommunications agents in Hamadan province.

As a result of the budget deficit, the government has suspended the implementation of the teachers’ salary ranking plan. The green-certificate teachers who have taught for years and have been approved for tenure positions after passing recruitment exams have also not received contracts even though the government is obliged to hire them. These teachers staged several protests in various cities in this period. Iranian teachers also held protest rallies on September 25 in more than 45 cities.

Aside from workers’ and pensioners’ protests in several cities, there have been dozens of protest rallies in different parts of Iran. Workers from the oil, gas, refinery, and petrochemical sectors staged the most widespread strike.The pensioners are also staged protest gatherings in this period. Farmers and ranchers in various provinces gathered repeatedly to protest the lack of water and the high cost of animal feed

Security forces are targeting labor and union protests. Several retirees were summoned to court or prison in Karaj, Mashhad, and Shiraz.  Three members of the Teachers’ Union in Gilan province were also persecuted.  AmirAbbas Azarmvand, a journalist defending workers’ rights, was also arrested in Tehran and later released on a hefty bail. The security forces and the Iranian Judiciary are using bails to silence defenders of workers’ rights.

The leading causes of protests over the summer of 2021 were the COVID-19 pandemic, economic recession, rising inflation, and the drought and water shortage crisis. Khuzestan, Iran’s wealthiest province in oil and gas resources, was affected by the water shortage crisis, leading to a cry of protest in June. In Khuzestan province, residents of marginalized and deprived areas took to the streets for at least 10 consecutive nights in Ahvaz, Hamidiyeh, Izeh, and other cities.

Iran’s Ministry of Cooperatives, Labor, and Social Welfare reports that the population below the poverty line increased by 10% in 2020. The Ministry’s report cites the continuous growth of food and housing prices as the two essential factors causing an increase in poverty. The report estimates that 32 million Iranians lived below the poverty line in 2019. The poverty line income for a family of three in 2019 is estimated at 2,785,000 tomans per month. This figure is inconsistent with official data provided by other government officials on the poverty line. The head of the Relief Committee, a government charity that covers 2,276 households (5 million people), announced that the monthly income of the poverty line in 2020 was 10 million tomans. In February 2021, around the same time as wage negotiations were taking place at the Supreme Labor Council, independent trade unions demanded that the minimum wage be set at 12 million tomans.

Zamaneh Media monitors Iranian topics daily, and this quarterly report presents the “big picture” of the most Iranian labor rights issues over the past three months. The information does not cover all labor-related events and topics. In addition to the quarterly reports, Zamaneh Media also publishes special reports on specific labor topics and an annual report.