Opinion: The Lebanese Government is Failing to Graduate

A picture taken on August 5, 2020 shows the damaged grain silo and a burnt boat at Beirut's harbour, one day after a powerful twin explosion tore through Lebanon's capital, resulting from the ignition of a huge depot of ammonium nitrate at the city's main port. - Rescuers searched for survivors in Beirut after a cataclysmic explosion at the port sowed devastation across entire neighbourhoods, killing more than 100 people, wounding thousands and plunging Lebanon deeper into crisis. The blast, which appeared to have been caused by a fire igniting 2,750 tonnes of ammonium nitrate left unsecured in a warehouse, was felt as far away as Cyprus, some 150 miles (240 kilometres) to the northwest. (Photo by STR / AFP)

As I write this article, nine days after the August 4th Beirut port blast, there are people still missing, some trapped under the rubble, some disappeared in the sea. More than 171 people are accounted for as dead and at least 6000 are injured. The parliament also has declared a state of emergency in its last sitting on Thursday, August 13th.

On Saturday, August 9th, thousands of angry protesters from all over Lebanon came to a gathering that was intended to be a funeral for the victims of the blast. The protest was a display of rage against the corrupt politicians of the Lebanese regime. The military was to a large degree absent on the ground when help was needed to evacuate citizens from their destroyed residences and to find victims under debris. On the day of the protest however, the military was present. Three minutes into the protest, the military started to throw tear gas grenades towards the crowd in the Martyrs Square and Gemmayze Street. With the declaration of a state of emergency, the military will have even more sweeping powers to suppress the protests or those expressing dissent. 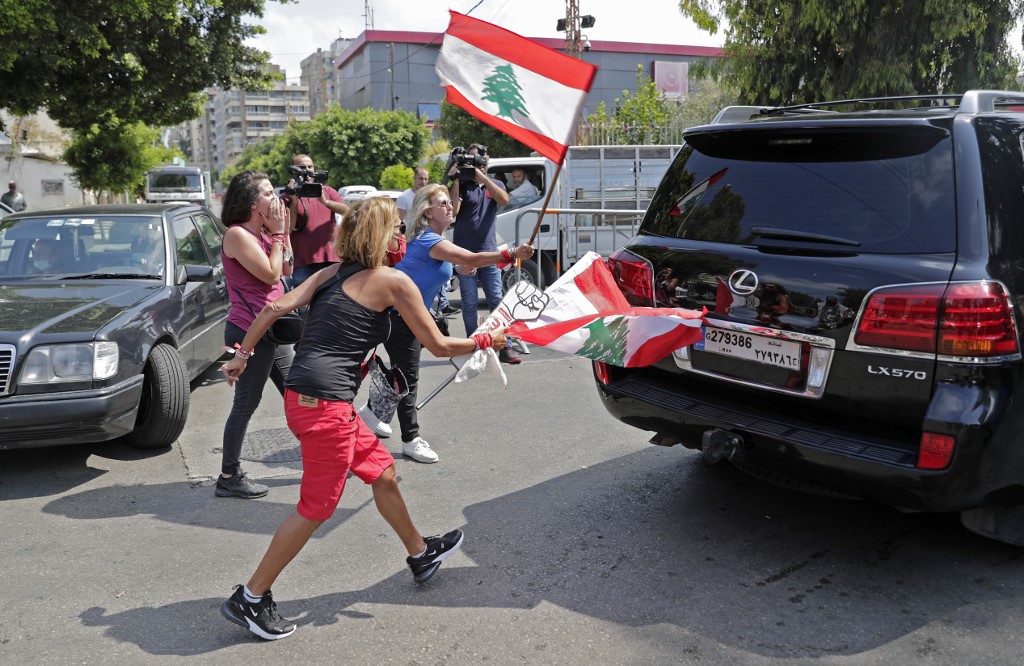 The Lebanese government has failed in many aspects. From one particular aspect, a failed government is the one in which its politicians throw passive accusations, hanging their disastrous negligence on the unnamed other. The resigned Prime Minister Hassan Diab, whose resignation on Monday, August 11th came one week after the Beirut blast, gave his disgraceful speech.

His words, like a prosaic school essay in an Arabic writing language class, exhibited the ruthless rhetorical methods that all Lebanese politicians have mastered in years: playing the role of the victim who had tried to be the hero to save the nation, but “they, the others” did not let him.

“I am fearful. When I think of how we are asking for a solution to be provided by the same politicians whom we do not trust”, said Farah, a humanitarian worker.

Farah says her happiness with the resignation of the government was only “ephemeral”.

The resignation came too late. Moreover, the parliament’s decision to declare a state of emergency confirms the approach of the government in dealing with the crisis: to let the military takeover and to adopt measures that cannot be applied ordinarily under the constitution. This will lead to more suppression of people’s voices and demands.

In a country where grade retention is not banned yet, the Lebanese politicians have become lazy spoiled students who, with their ignorance, solution outsourcing, negligence, corruption, manipulation, and hustling, have failed to graduate.

These failed politicians are still repeating their grades in a flawed sectarian government that they simultaneously rule and enroll in.
Beirut was already facing a pandemic along with a crippling economic crisis that made Lira lose 80% of its value, and citizen’s savings to be blocked in the banks. And now, this city of shattered glasses is witnessing the tears and sorrows coming out of blown-out windows.

While many people still do not have a home to mourn inside, politicians have already started to use the blast as a political “opportunity”.

Khaled Sobeih, a musician who founded ‘The Great Departed’ band, believes that the government now will try to “reshuffle the cards” and repeat the same old structure of a national unity government instead of giving way to a technocratic one.

A political singer whose songs target the government’s corruption and incompetence, Sobeih predicts that Beirut will meet parts of the demands of each international player, and by doing so, it prepares the conditions for the corruption to continue on in spite of the protests.

“To avoid repetition, a serious investigation must be held which will lead to the destruction of the indestructible leading figures in the eyes of their followers,” says Sobeih, “…that can only happen if people don’t leave the streets, and if we manage to press on the necessity of having the supervision by the international community on the investigation and if the journalists dare to publish documents that show evidence that all leaders without exception are contributing to the corrupted regime,” he adds.

The ‘other’ that they warn us against is not simply an international threat: it is not only Israel or the Islamic State. “The other” in Lebanon is somebody with a different religion from “mine”, such as a refugee or a neighbor that lives next door. The circle of “my” friends are narrowed down to the extent so that each individual thinks one’s only survivor will be the sectarian leader of one’s community.

“By the way, Ali, the person who saved me was from another religion”: this was a sentence that Kristel, a badly injured victim of the blast said to a TV reporter on Thursday. A woman who faced death, thinks mentioning such detail about the religion of the one who saved her, is an important fact to the story. This is the depth of the identitarian problem in Lebanon.

The Lebanese President Michel Aoun has given himself the status of a Patriarch by calling himself “The Father of Everyone”. How he has managed to make politics about an unconditional emotional relationship between a father and a child is one story but he is certainly expecting forgiveness from the child, as an irresponsible father – and this is the tragic side of the story.

Maybe we have been outsmarted by our politicians, maybe we have understood politics the way our politicians want us to understand. Such an understanding above all sabotages the realization of the Lebanese people’s demands and desires for a political milieu free of corruption and mismanagement. For those on the streets voicing these demands, now comes the time to understand that politicians work for us, for each one of us, and if they do not do their job, we have to have the power to fire them and never hire them back again.

* Diana Al Halabi is a Lebanese artist residing currently in The Netherlands. Her artworks mostly speak of the struggle and fight against patriarchy and the effects of dictatorship and news on her upbringing.

Coup 53: A Re-Enactment of the British and American Role in the Overthrow of Mohammad Mossadegh