The Latest on Neda Naji, the Last 2019 Labor Day Detainee

Iranian activist, Neda Naji, who was arrested during the Labor Day rally on 1 May 2019 is still in prison.

Neda has been sentenced to 5.5 years in prison for “assembly and collusion against national security,” and “ insulting governmental officials”.

Zahra Minoii, Neda’s attorney told Irna Plus that they have appealed against the sentence.

Judge Mohammad Moghiseh has denied bail while Neda Naji is waiting for the final decision of the appeal court.

Moghiseh told Neda’s attorney that accepting the bail during the appeal is out of his jurisdiction.

Since her arrest on May 2019, all the requests for bail have been denied.

Jamal Ameli, Neda’s partner tweeted on December 27: ”241 days passed and Neda has not come back from Labor Day Gathering. This is the 35th Friday that she spends in prison.”

Earlier on December, Jamal wrote in another tweet that Neda has been transferred from notorious Qarchak Prison to Evin Prison.

Neda and a few other activists were held in Qarchak Prsion with non-political prisoners in a bad condition. According to the several  reports, other prisoners had attacked Neda and other labor activists and brutalized them in Qarchak.

Sepideh Gholian,  another labor activist who was also in Qarchak in that time has written a letter about prison conditions.

All of the detainees of the May Day protest have been released on bail, and Neda Naji is the only one still in prison.

It is not clear why the bail requests for Neda is being denied, but on October 2019, Center for Human Rights in Iranmentioned the situation of Neda Naji in a report about the hunger strike of detained women rights activists.

In this report, according to a source who spoke on the condition of anonymity, the way authorities are treating Neda is all about sending message to other activists.

“Atefeh and Neda are women’s rights activists, whose presence at the Labor Day rally in solidarity with the workers irked the Intelligence Ministry. The other detainees were all released the same day but they held on to Neda, Atefeh and also Marzieh Amiri, who is a women’s rights activist and journalist. It’s as if they want to punish them in order to intimidate other activists,” the source told CHRI. Atefeh Rangriz and Marzieh Amiri has been released since the publication of this report. 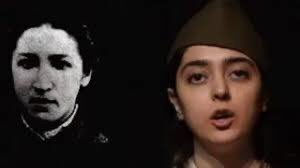 Neda is 30 years old and has a B.S. in chemistry. She is also an actress, who played the Russian Anarchist Valentia in the Iranian documentary drama Emma Goldman: Living My Life.

Iranian Authorities Respond to Labour Protests with Scores of Arrests

Narrating the Stories of those Killed in Iran’s Gasoline Protests

November Protests in Iran and the Cases of Disappeared Protesters