The protests that have erupted across Iran since 15 Nov 2019 are the second round of nationwide protests in Iran in the past two years. This time, Iranian people have come to the streets after the decision by the authorities in Iran to significantly increase gasoline prices. What connects these two waves of widespread protests in 2018 and 2019 in Iran, is the ongoing labor protests surrounding economic demands. 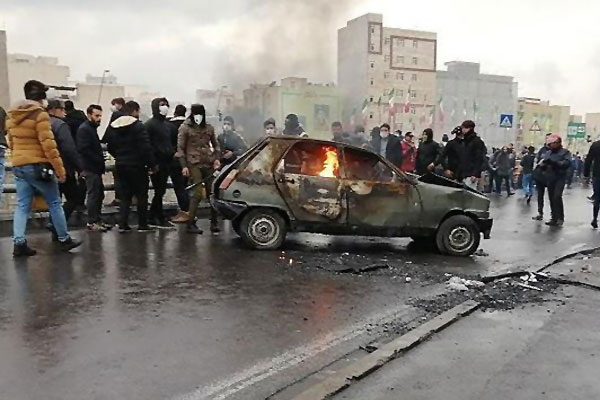 This is the second time since Dec 2017 and Jan 2018 protests that uprisings related to economic conditions have become widespread. Protests have been reported in more than 100 cities across the country. At the onset of the 2018 protests, Zamaneh Media published an analysis addressing those critics that were surprised by the spread of the protests to many cities, stating that in the past four years Iran has been witnessing almost weekly occurrences of workers’ protests and strikes due to unpaid wages and benefits – many of which have been in peripheral areas and smaller cities.

Since job security has dramatically decreased, unemployment is increasing, inflation is at 40% and more Iranians have to buy goods at increased prices, any changes that soar up the costs of living and decrease the overall earnings of Iranian families will ultimately incite anger and dismay among the general public. The crippling economic conditions are now affecting the Iranian poor and the middle classes’ management of their household economy and are increasingly pushing the Iranian middle class into groupings such as those living under the poverty line.

It is in such milieu that the Supreme Council of Economic Coordination, an extra-legal body comprising of the President of Iran, Hassan Rouhani, the head of the Parliament, Ali Larijani and the head of the Judiciary, Ebrahim Raisi decide to increase Gasoline prices by as much as 300% with the backing of the Islamic Republic’s supreme leader, Ali Khamenei.

The Supreme Council of Economic Coordination has decided that for the first 60 liters of gasoline monthly, the price for private vehicles will increase by some 30% and for every liter, after the 60-liter cutoff, the price will increase by 300%.  Public vehicles, motorcycles and taxis have a different system of calculating the price of fuel but the price has increased for them as well.

The Supreme Council of Economic Coordination’s decision to increase the gasoline prices is accompanied by analysts close to the state talking about the liberalization of prices, deregulation, and benefits of a competitive free market with globalized prices. Privatization in Iran, however, has become synonymous with the Islamic Republic’s attempts since the time of the presidency of Akbar Hashemi Rafsanjani (4th president of IRI 1989-1997) to use ideas of neoliberalism to its benefits. Privatization as done by the Islamic Republic therefore adds to the effects of corruption and economic mismanagement. The state argues that we are going to use the money to feed the poor in the country. Citizen’s argue that the government wants to fill its own pockets.

The Islamic Republic needs the revenue from the gasoline price increase for its budget deficit due to loss of oil revenue, but the increase in the price is also part of a macroeconomic and structural agenda of the sate to eliminate subsidies, liberalize prices make economic adjustments and privatize previously public services such as education and health. Yet this is happening without structural economic integration of measures to protect the Iranian citizen’s private economy. This translates to an economic disaster for the Iranian middle and lower classes and they are feeling the effects of such policies daily.

Years of economic mismanagement, corruption and the effects of US sanctions on Iran’s economy is showing its effect on citizen’s lives and this is the core driving force of the gasoline protests in Iran.

An already heavily subsidized commodity in the oil-rich country, gasoline in Iran is still cheaper than most regional countries but the recent waves of protests are not just about gas prices. It is about the overall crippling economic conditions, rising prices, families’ low earnings and high inflation rate that is now increasing monthly.

It is also about the unofficial economy that feeds the Iranian unemployed. So many unemployed Iranians depend on wages gained from driving passengers as official and unofficial taxi drivers. Increasing gasoline prices means lower wages for those unemployed Iranians who are taxi and Snapp drivers – Snapp is Iran’s version of Uber. It also means an increase in the price of goods that have to be transported – Iranians are already reporting some 30% increase in goods prices post Nov 15th, 2019.

Economic slogans about rising prices and people not having money are common in the protests. However, People on the streets are also voicing political demands including chants like “death to the Islamic Republic,” “death to Khamenei,” “oil Revue is missing, it is being spent on Basijis,”  “mullahs get lost,” “Khamenei get lost,” and “we will fight, we will die, we will take Iran back.”

This trend of economic slogans becoming more and more political was also observed in the 2018 widespread protests which also faced violent crackdowns. Between the uprisings of January 2018 and the uprising of November 2019 over gasoline prices, what have continued despite the violent security crackdowns and mass arrests are the continuous protests of the workers around economic and labor demands.

The workers’ movement in Iran is likely to continue past the current ongoing protests in Iran over gasoline prices. The labor movement connects the widespread protests of 2018 to that of 2019 and will likely ensure the continuity of such protest movements in the future.

In the current Nov 2019 gasoline protests, figures involved with the labor movement are also participating. Sepideh Gholian, a student labor rights activist who was arrested several times related to her activities for Haft Tapped Sugarcane workers’ strikes and protests, participated in the gasoline protests holding a placard saying: “you increased the fuel prices but did you also increase wages?” The security forces violently re-arrested her. Gholian has already become a hero and a figure in the fight for social justice and as such the unknown and known heroes are in the making.

Indeed, the possibility of a mass crackdown of the Nov 2019 protest is likely, as the Iranian state managed to control the 2018 protests with mass arrests and violent crackdowns. Iranian security forces and riot police have used “excessive and lethal force” to crush the gasoline protests according to Amnesty International who has estimated that at least 106 people have been killed by Iranian forces since the protested started at midnight 15 Nov 2019.

The violence against protesters continues. Some 1000 people have been arrested so far and the protests have spread to more than 100 cities. Many journalists, including Shahid Aalavi who is documenting the killings, say that the numbers of those killed are higher and in the range of 200.

The economic and political demands of Iranian people are likely to continue to be voiced despite this crackdown through movements such as the labor movement and though the teachers, nurses, bus drivers, truckers, retiree, and agricultural workers who keep coming to the streets for more and more demands.

The fact that Iran has shut down the access of Iranian citizens to the world wide web is not helping the protesters. It is also very hard for journalists and human rights documentation centers to keep track of the death toll, the wounded and to document cases of arrest and imprisonment. Human Rights Watch has stated in a statement that “Iranian authorities are desperately shutting off the global and internal flow of information in Iran in the hope that the outside world will turn a blind eye to their brutal crackdown.”

The protests are now in its sixth day, as the Iranian authorities including the Supreme Leader and the president keep coming to national media to announce their victory over protesters calling them “thugs” and “security threats,” without addressing the economic and political demands that are being voiced on the streets.