Workers of a sugarcane factory as well as labor rights activists and journalists who supported their cause in Iran have been slapped with between six to 18 years of prison including corporal punishments for staging protests for past due wages and benefits. 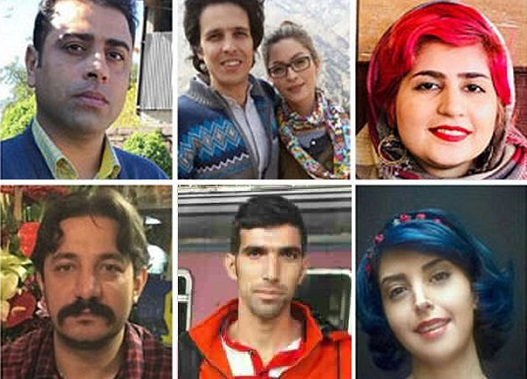 Esmail Bakhshi a representative of the workers of Haft Tappeh Sugarcane Complex in Southeastern Iran has been sentenced to 14 years of prison time and 74 lashes on 7 Sept 2019. Seven years of those 14 years is executable according to the Islamic Penal Code of Iran.

Branch 28 of the Revolutionary Court in Tehran sentenced Sepideh Gholian (Qoliyan), a student and citizen journalist who was covering the protests of Haft Tappeh Sugarcane Complex, to 18 years in prison of which seven years is executable.

Jamaluddin Heidari Manesh, a lawyer representing Sepideh Gholian confirmed on 7th of Sept that the sentencing has been completed on the case of Gholian who only supported the protests of Haft Tappeh Sugarcane workers by posting photos and information online. Gholian’s lawyer stated that most of the charges that she was convicted of are of national security nature including membership in an illegal group, conspiracy to take action against national security, and propaganda against the state.

Other labor prisoners have also been charged and sentenced based on national security charges.

On 19 January 2019 the public broadcaster IRIB broadcasted televised confessions of Ali Nejati and Esmail Bakhshi, workers of Haft Tappeh Complex as well as Sepideh Gholian, confessing to acting against national security by working with hostile groups and governments. Before and after the broadcast, Bakhshi and Gholian announced that they were tortured while in detention and that the televised confessions were coerced. They also repeated this during court hearings and said all the charges against them were based on forced confessions under torture.

Another Haft Tappeh Sugarcane worker, Mohammad Khanifar has been sentenced to six years in prison. The cases against protesting workers of Haft Tappeh Sugarcane Complex are ongoing and according to workers representatives, 100 workers have been arrested, summoned and or interrogated so far. Most of those who have been imprisoned so far have been charged with combination of national security charges including “assembly and collusion to act against national security,” “acting against national security through propaganda,” “spreading lies in order to disrupt public opinion” and “disrupting public order by attending illegal gatherings.”

Haft Tappeh Sugarcane Complex workers staged several protests and strikes in 2018 and 2019 to demand their past due wages and oppose the privatization of the factory. Some workers had not been paid for over four months when they came and joined the protests.

A video of Esmail Bakhshi leading these protests went viral when he asked the workers to demand “bread, work and freedom.” Ever since, the slogan “Bread, Work, and Freedom,” has become a popular slogan of workers protests’ in Iran.

Earlier on Aug 2019, Shargh Daily’s, Marziyeh Amiri was sentenced to 10 years and 6 months in prison and 147 lashes for covering May Day protests.

Iran has been witnessing frequent labor protests in the past two years with hundreds of workers and labor rights defenders arrested. Now the Revolutionary Courts in Iran are sending a clear message with these harshest prison sentences.

The Iranian economy is suffering after the reinstatement of US economic sanctions and years of corruption and mismanagement is showing its effect on the workers’ lives.

At the heart of the issue of corruption and mismanagement is the Iranian Privatization Organization (IPO) that since 2001 is transferring the ownership of public companies to the private sector. Through the IPO the government transfers institutions at a fraction of their actual value to selected individuals connected to the state, ridding itself of the burden of paying workers past due wages.

The new private owners of factories benefit from resale or reuse of the assets of the unit more than the continuation of production. Production and workers suffer from unpaid wages and mass layoffs.

Of the first 100 companies that went private through IPO from 2001 to 2004, 16 are shut down, six are in a semi-closed state, 29 are in economic trouble, and 62 have dismissed their workforce with unpaid wages. From March 2018 to March 2019, the IPO has transferred 631 governmental companies to the private sector.

Zamaneh Opinion Panelists: Support for the Letters of Dissidents inside Iran Asking the Supreme Leader to Step Down