Two Policemen were supposed to be fired for a recent brutal arrest of a young woman in Tehran. But the decision was suspended a few hours after its announcement. 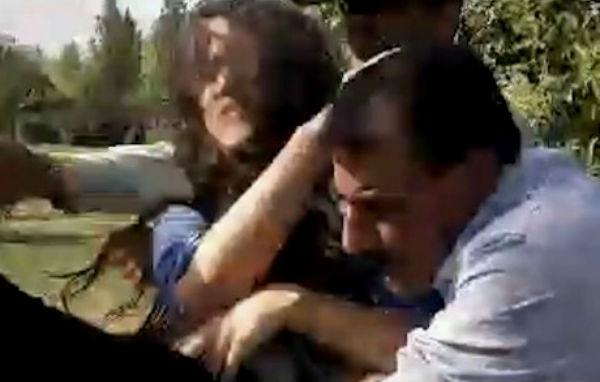 “After a thorough investigation, the final decision will be made”, Brigadier General Hassan Rahimi added.

A few hours before the new announcement, Hassan Rahimi had said two police officers, who were involved in the incident of beating a young woman in the east of Tehran, were arrested and then dismissed.

Short after the initial announcement, however, he said that the initial investigations by the inspection office made him to suspend the first decision.

In recent days a video has gone viral on social media. In this video, police is brutally beating a young woman while dragging her into a police car. The young woman is screaming and the crowd is begging the police to let her go.

Tehran Police Chief claimed the young people reacted to the police warning in a “non-appropriate way” which was the reason for the incident. He also confirmed the initial reports that these young men and women were under drug’s influence. There is no official medical testimony over this claim.

Every summer and with the beginning of the warm season, the Iranian morality police increases the pressure on enforcing Hijab. The strict dress code requires Iranian women to cover their heads with a scarf and wear modest attire. Many Iranian women, especially the younger generation, have been defying this dress code and taking advantage of any opportunity to take off their veil.

Many Iranian women and activists oppose forced Hijab. They say that it is a personal decision and should be voluntary.

Violations of Baha’i Rights are a Systematic Policy in Iran