As labor protests in Khuzestan persist, eleven of the 41 detained workers of National Steel Industrial Group (INSI) in Ahvaz have been released on hefty bails but security forces are increasing the pressure on those who were released. 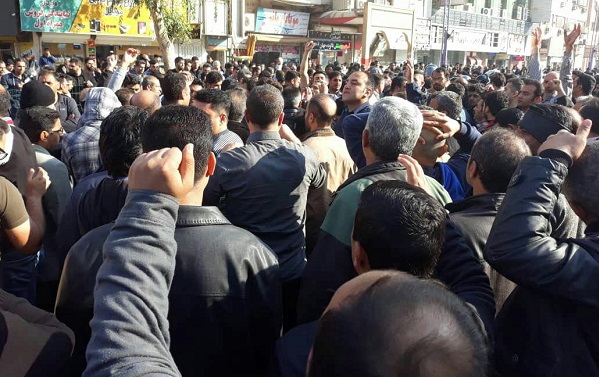 Most of the arrests were carried out on the night of 17 Dec and on 16 Dec.

According to Khuzestan prosecutors, some workers are in custody for “guidance” purposes.  Meanwhile, the Governor of Khuzestan threatened workers and emphasized that the workers will only be released if the protests are terminated.

On Tuesday, December 27, Khuzestan judicial authorities and other provincial government figures met on the premises of the National Steel Industrial Group plant. At the meeting, the Governor of Khuzestan, Gholamreza Shariati, asked for an end of the protests and return of workers to the workplace as a condition for the release of the detained workers.

In an audio file leaked from the meeting, workers ask the governor to “free the workers.”The protesting workers call governor’s request a “hostage-taking” situation. They add that they would not accept any conditions or bargaining until the release of all the arrested workers.

The authorities persist in treating the protesting workers as security threats. Those who are released on bail all face a common fate and the authorities have cut-off all connections between them and their protesting colleagues.

In the meanwhile, some of the eighteen workers that were arrested in the November protests of Haft Tappeh Sugarcane Complex and some of those who were not arrested have been called in for more questioning. Some have received a text message saying that their charges have been finalized.

Esmail Bakhshi, one of the detainees from Haft-Tapped has been temporarily released on a bail of 400 million tomans. Bakhshi was severally beaten and forced to sign an agreement while in custody. He is not under house arrest but under extreme pressure to have any contacts with his colleagues and has been fired from his job awaiting trial.

Ali Nejati, a retired worker and member of the Haft Tappeh Sugarcane Syndicate’s Board of Directors, still remains in custody.

The Governor’s political adviser has announced that the demands of the workers are “outside the legal framework” and speaking on Iranian Labour News Agency (ILNA) stressed: “We expect workers to pursue their demands in the framework of the law.” He added however that the governor’s office is trying to secure the release of the detained workers.

The labor minister, Mohammad Shariatmadari had also stated that his ministry is working with Khuzestan authorities to free detained workers. However, the ministry’s emissary to the province announced soon after that the ministry cannot interfere in the matter.

Iranian authorities have been dealing with widespread labor protests across the country with workers demanding job security and payment of their delayed wages.

Winter Solstice Celebration in Iran and Rising Prices of Food