A pivotal politician in Iran’s internal struggles for reform and the former president of the country, Akbar Hashemi Rafsanjani dies in Tajrish hospital after a heart attack. Hashemi was 82 years old. 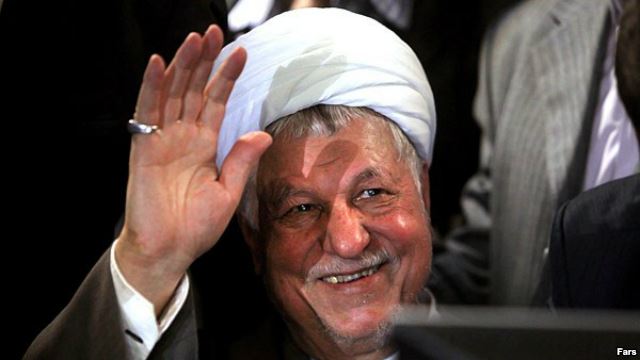 His brother, Mohammad Hashemi confirmed the news adding that at 18:30 on 8 Jan 2017, Hashemi suffered a heart attack and was taken to the hospital.

Following Hashemi’s death crowds of people moved to the hospital. Crowds also gathered outside of Jamaran complex, the former house of Ayatollah Khomeini, the founder of Islamic republic whose grandson, Hassan, is supporter of Hashemi.

Hashemi started out as a revolutionary coming to power after the 1979 revolution. Hashemi, his sons and his greater family were proponents of free market economy in Iran. His economic policies, paved the infrastructure for Iran’s current sphere of economic distress and accumulation of wealth by many government officials.

Hashemi coming from a wealthy agriculturalist family, was a political prisoner during the Mohammad Reza Shah’s reign in Iran.

A key figure of the 1979 Islamic Revolution in Iran and a trusted ally of both Ayatollah Khomeini and Ayatollah Ali Khamenei, Hashemi played a supporting role in bringing the second leader of the Islamic Republic into power.

Hashemi served as the president of Iran after Khomeini death from 1989 to 1997 under the supreme leadership of Ali Khamenei.

The two men, Khamenei and Hashemi however grew apart after the reform movement became a political party in Iran in 1997. Hashemi was first attacked by the reform movement but later joined them favoring free market economy, cultural progress, dialogue with the West and global economic relations.

In a statement following Hashemi’s death, Khamenei calls him “an old friend” adding that: “in recent years those foul attempts to abuse and benefit from our differences in opinions could never tremble his [Hashemi’s] deep affection for me.”

His death comes at a time that the current reformist government of Hassan Rohani is under pressure from hardliners for negotiations over Iran’s nuclear ambitions with group p 5+1. Hardliners argue that Rohani administration made a bad deal.

Hashemi has been a supporter and ally of Rohani’s government and has served as a mediator, resolving the differences of the reformists with the hardliner factions and figures.

A Notorious Planner of Terror

Hashemi’s name is associated with a number of controversial international events, including the Iran–Contra affair scandal during the Reagan administration in the United States, in which secret arms sales to Iran was facilitated to fund the Contras in Nicaragua.

A number of terror plots outside of Iran against Islamic Republic enemies were conducted during Hashemi’s presidency. Including the Mykonos restaurant assassinations in 1992 in which Iranian-Kurdish opposition leaders were assassinated at the Greek restaurant in Berlin, Germany.

During the Mykonos assassination trials in Berlin, Hashemi’s name was recorded in court proceedings as a key figure. He was later convicted of the assignations by the German court.

Hashemi was a memoir writer; in his last volume of memoir published in Tehran, he acknowledges that Iranian officials including the minister of intelligence were involved with Shapour Bakhtiar’s murder in Paris. Bakhtiar was as Iranian politician who served as the last Prime Minister of Iran under Mohammad Reza Pahlavi.

On 6 Aug 1991, Bakhtiar and his assistant Soroush Katibeh were murdered by three assassins in Bakhtiar’s home in Paris. Hashemi writes in his memoir that Ali Fallahian, the ministry of intelligence at the time, informed him of Bakhtiar’s and Katibeh death in Paris prior to the news becoming public in the media.

Hashemi on 7 Aug 1991 writes: “Mr. Ali Fallahian informed me that Bakhtiar and one of his employees were killed in Paris at his house. No news of the event was broadcasted on international new until night time.”

The very next day on 8 Aug 1991 Hashemi adds: “The directors of ministry of intelligence came to visit. Mr. Fallahian delivered a comprehensive report and I – in an in-depth conversation – offered them justifications on fundamental issues. In the afternoon the news of the homicide of Bakhtiar and his assistant was published and found wide coverage […].”

During the reform area in Iran (1997-2005), Akbar Ganji, Iranian politician and former political prisoner, accused Hashemi of having a role in a series of murders conducted by IRI intelligence in which progressive Iranian intellectuals and opposition figures were targeted.

From Centers of Power to the Power of People

After serving two terms as president, Hashemi became the head of the Assembly of Experts in 2007. He was also the chairman of the Expediency Discernment Council of Iran; a non-electoral position.

Hashemi was however after political limelight and electoral legitimacy. Despite having the two above positions of power, Hashemi was after elections, seeking position as a member of parliament and again as the president of the country.

After the coming to power of Mohammad Khatami, Iran’s reformist president from 3 August 1997 to 3 August 2005, Akbar Hashemi Rafsanjani received a blow from the reformist factions and reformist media: they portrayed him as the corrupt godfather of power in Iran.

In the sixth parliamentary elections a group of reformist running for the parliament brought strong criticisms against Hashemi and he withdrew from participation in the Sixth Parliament.

He also ran for the 2005 presidential election against Mahmoud Ahmadinejad, a hardliner candidate, and lost.
Having lost his power games with the reformist he also lost his leverage with the hardliners and started to work his way through as a loner in Iranian politics but now becoming a vocal voice for progress and greater participation of people in real politics.

In 2009 presidential election, Hashemi and his family stood with the people who opposed Mahmoud Ahmadinejad’s presidency and argued that the elections were rigged.

After the 2009 disputed election, Hashemi’s voice for pragmatic politics, increase in political participation, importance of electoral bodies and his controversial idea about forming a supreme leadership council after the death of Khamenei, separated him from the current leader of Islamic republic.

He was to play a great role in the fight for succession after Khamenei’s death but he died before his old friend.