On Sat 15 October 2016, the Defenders for Human Rights Centre along with the chair of the organization, Shrin Ebadi asked the global community to join in solidarity with a campaign that calls for the immediate release of political prisoner Narges Mohammadi. 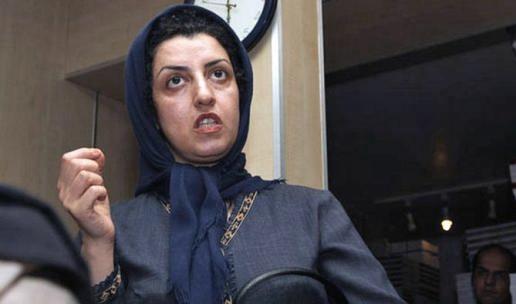 In a statement Shirin Ebadi, the Iranian Nobel laureate called Mohammadi, a mother of two, and the Deputy Head and Spokesperson of the Defenders for Human Rights Centre, an organization based in Iran that has been active in defending the right to life as well as the rights of women, political prisoners and minorities in Iran.

In April 2010, Mohammadi who has been arrested and imprisoned a number of times was summoned one more time to the Islamic Revolutionary Court for her involvement with the Defenders for Human Rights Centre in general and in particular for the campaign to end the death penalty in Iran.

From 2010 to 2012, Mohammadi was sentenced and re-sentenced for the same charges to 11 years imprisonment. On May 5, 2015, Mohammadi faced new charges, this time for defending ethnic minorities facing execution in Iran. Narges Mohammadi received a confirmation of sentencing for 16 years from the appeals court on Monday September 26 on charges including “acting against the national security of the state, membership in the stop death penalty campaign, and propaganda against the state”.

Shirin Ebadi and the Defenders for Human Rights Centre’s campaign for release of Mohammadi sheds light on the most recent sentencing: “Mohammadi, has just been re-sentenced for an extra sixteen years imprisonment, ten years of which is enforceable.”

Mohammdi, who has been in and out of prison for the past eight years, has already been in prison consecutively for the same charges in the past two years. Her colleagues at Defenders for Human Rights Centre write: “she has to spend 16 years in prison, simply because she has spent her life defending humanitarian values and dignity.”

Mohammadi has been periodically denied contact with her children she has gone on hunger strike for the right to simple phone call with her family. Her health has also been declining while in custody were she developed a neurological condition causing epilepsy. She periodically loses muscle control for which she had to be hospitalized a number of times.

Mohammadi’s colleagues at the Defenders for Human Rights Centre think that the Islamic Republic judiciary and its security forces are making an example of Narges Mohammadi and this is an “attempt to silent human rights defenders’ voices against the death penalty.”

The Defenders for Human Rights Centre in Iran has asked all global organizations working for human rights and freedom of expression to join in solidarity for the release of Narges Mohammadi.

Women’s sports in Iran after the Revolution

Prison conditions in Iran cause slow death of prisoners