The days leading to the International Workers Day in Iran has been eventful. Official events were weeklong and the independent labour organizations which do not fit into the official framework prepared for the day issuing statements and resolutions and came up with innovative ways of assembly to mark the day. 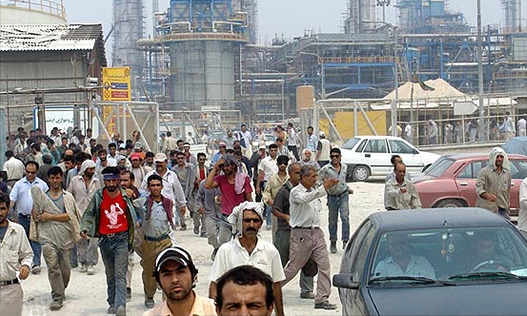 Official Events
Worker’s House and the Ministry of Labour usually organize the events of Worker’s week together.
The leader of the Islamic Republic has dubbed this year, the year of “Resistance Economy: Initiative and action” and the events of the Worker’s Week are influenced by this theme.

Sunday April 24 the first day of the events was called “Day of Workers, Imam and the Revolution” and saw a group of workers and pensioners affiliated to the Islamic labuor associations of Beheshte Zahra Cemetery “renewing their covenant with the founder of the Islamic Republic”.

Ali Rabii, the labour minister said at that event which according to ILNA was attended by 1500 people: “Even though there are no war fronts now; we have to stand tall and produce for the sake of our independence. Even workers who have not been paid for seven months, remain inside factories to continue production.”

The second day was the day of “Work, Health and Social Vitality”, the third, “Worker, Pensioner and Hopes for the future and Social Security”, the fourth, “Initiative, Action and Resistance Economy”, the fifth, “Women, Jobs and Social Development”, the sixth, “labour, skills and spirituality” and finally, Saturday will mark the seventh day under the title “Worker’s Day and the Worker”.
Wednesday which was the day of Resistance Economy was observed by a visit by labour association representatives and the labour minister to the Supreme Leader Ayatollah Khamenei. The labour minister read a report at this visit indicating that initiatives between workers and employers have led to “reduction of the gap between inflation and wages.”

Ayatollah Khamenei responded that “officials, professors, students, seminarians, managers are all included under the general definition of worker as their work produces value”. He added that workers and employers are not to be blamed for factory closures adding that industry, trade and finance authorities should take charge of the current affairs. He urged workers not to be taken by brand products and to buy domestically produced goods.

He further stressed that he has always warned that the US is not reliable referring to US allegations that Iran supports terrorism adding that they foment Islamophobia and prevent international banks from dealing with Iran.

Ayatollah Khamenei also urged workers to participate in the second round of elections. Soon after Worker’s House announced its support for the Reformist Hope List. Worker’s House has announced that it will hold the May Day march. Head of the house Alireza Mahjoub stressed that workers are permitted to hold their march and whoever is opposing it should be convinced that the march is a reflection of the Imam’s and the Revolution’s principles.

Jafar Azimzadeh, president of the Free Trade Union of Workers in Iran and Ismail Abdi, head of the Iranian Teachers’ Association who are currently in Evin Prison for their labour activities have announced that they are going on hunger strike. They have stated that in protest to “branding of labour activities as security crimes, below poverty line wages, prohibition of celebration of International Workers’ Day and Teacher’s Day independently, lack of transparency and the effective operation of the International Labour Organization (ILO) concerning the violation of the fundamental rights of Iranian workers” starting on Friday they will begin refusing food for an undetermined time.

The statement has triggered widespread support for the two jailed activists by independent labour organizations such as the Committee to Establish Trade Unions, Union of Workers of Haft Tapeh sugar cane, the Association of Electric and Metal Workers of Kermanshah and Free Trade Union of Workers.

Messages and Rally Calls
South Pars Project Workers, Mahshahr and Bandar Imam Petrochemical Complex Workers, Southern Labour Activists and labour activists in Tehran-Karaj corridor, Susa and Andimeshk issued a statement counting the many problems facing workers and urging the labour community across the country to unite behind their demands for fair wages and conditions. They call for a united voice against incarceration of labour activists and all political activists and a united front to fight for workers’ rights to have insurance, to strike, to equal pay for men and women and to equal pay for migrant workers.

Similar announcements from various independent labour organizations and groups call on the government to end the trend of privatization of public industries and factories, and the layoff of workers and to commit to an equitable minimum wage for workers.