Asylum seekers have staged a peaceful rally in the Greek village of Idomeni to protest Macedonia’s decision to deport some of them. 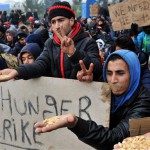 AP reports that about 1,300 asylum seekers mostly from Morocco staged protests in the Greek border village. The protesters were migrants from Algeria, Tunisia, Libya, Lebanon, Pakistan, Bangladesh and Congo.

Protesters reportedly chanted slogans such as “Freedom!”, “We are not terrorists!” and “We will not return!” and called for permission to pass through Macedonian borders.

With the increase in security measures at European borders, asylum seekers have become stranded.

A number of asylum seekers have reportedly begun hunger strikes. Another group has set up tents at the border of Greece and Macedonia and blocked the railroad passing between the two countries.

The Macedonian government decided last week that in light of the terrorist attacks in Paris, they would no longer allow entry to asylum seekers who are not from war zones such as Syria, Afghanistan and Iraq. A similar decision has already been implemented by Serbia, Croatia and Slovenia.

The International Organization of Migration reports that 680,000 people have landed on European shores this year fleeing war and terrorism, making hazardous sea journeys from Turkey to Greece. More than 3,000 have reportedly died or gone missing trying to reach Europe.