In the middle of a speech by Reformist figure Abdolvahed Mousavi Lari, he was attacked by about 300 hecklers, prompting Iran’s interior minister to ask the Tehran Governor to launch a probe into the attack to identify and prosecute the perpetrators. 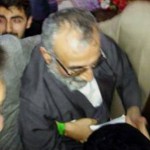 On Thursday November 19, Abdolvahed Mousavi Lari, a former interior minister in the reformist government of Mohammad Khatami, and Morteza Elviri, another prominent reformist figure, were to give a speech in Varamin. Extremists gathered in front of the venue and forcefully prevented the event from getting underway.

IRNA reported that about 200 people were involved in the attack.

The interior ministry says it will pursue the matter but also indicates that despite the disturbances, the event did take place.

In recent months, as the parliamentary elections approach, many reformist politicians have been targeted with violence and prevented from reaching out to the public by right-wing factions of the Islamic Republic establishment.