The Peshmergas of Kurdistan have succeeded in recapturing Sinjar and driving ISIS forces out of the city that was overtaken by the extremist forces in August of 2014. 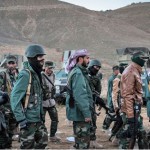 Saeed Memozini, spokesman for the Iraqi Kurdistan Democratic Party, told the Russian News Agency Sputnik that Peshmergas have taken control of Sinjar and raised the Iraqi flag in the centre of town, and ISIS fighters have retreated to Mosul and Tal Affar.

AP reported on Friday November 13 that there was little resistance, as many of the ISIS forces had apparently retreated in anticipation of the offensive.

ISIS took the city in August of 2014 and went on the kill and enslave thousands of people from the minority Izadi community.

“It’s time for the Izadi girls to raise their heads up. Revenge has been taken for them,” said Masoud Barzani, the president of Iraq’s Kurdistan region. He told fighters in Sinjar that “Sinjar is very important because it’s become a symbol of injustice against the Kurdish people.”

Economy of Resistance and resistance of the centres of corruption