More than 1,000 people attended the funeral for prominent labour activist Kourosh Bakhshandeh, who was laid to rest on Friday November 6 in his native Sanandaj. Bakhshandeh died from a heart attack the previous day. 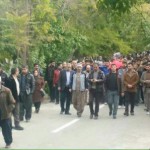 The Iranian labour activist was a member of the Coordination Committee to Promote Workers’ Organizations and was also an executive member of the Defence Committee for Mahabad Labour Activists.

The Campaign to Defend Political and Social Activists reports that Bakhshandeh had undergone open heart surgery at Tehran’s Rejai Hospital. He had been advised against excessive daily activity and subjecting himself to any stressful situation.

The Coordination Committee website reports that the mourners wrapped Bakhshandeh’s body in a red flag in accordance with the request in his will.

The ceremony was held under strict surveillance by security and intelligence officers, who reportedly recorded the event and took photos of the participants. 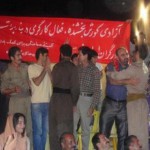 Branch One of the Sanandaj Revolutionary Court sentenced Bakhshandeh to two years in jail in September for purportedly belonging to the dissident Kurdish group Komeleh as well as independent labour organizations, and also for participating in protests and demonstrations. The sentence was reduced to just over three months due to illness and old age.

Bakhshandeh was arrested last March and released two months later on bail of 100 million toumans.
He reportedly denied all charges against him in court. He also denied any link to opposition groups abroad and insisted that his activities for the Coordination Committee to Promote Workers’ Organizations were completely legal.

Koroush Bakhshandeh is the second labour activist to die in recent weeks. In September, jailed labour activist Shahrokh Zamani was pronounced dead at Rejai Shahr Prison. His inmates realized he was dead when they tried to rouse him for the morning stroll in the prison yard.

Zamani was also a member of the Coordinating Committee He was part of the delegation for the reopening of the Construction Workers and Painters Syndicate. He was arrested in July of 2011 and sentenced to 11 years in jail for his labour activities. He was laid to rest in his native Tabriz.

Some analysts have linked the rising number of heart attacks and strokes among activists to the continued stress and pressure they are subjected to by the Islamic Republic authorities.