A Shia paramilitary group in Iraq has taken responsibility for the attack on Camp Liberty, the base that houses members of the Iranian opposition group People’s Mojahedin of Iran still remaining in Iraq. 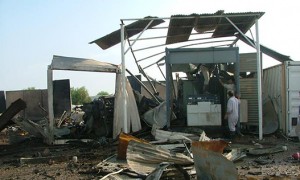 Iranian media report that the group Jeysh Al-Mukhtar announced that it carried out the attack on the group, which it has frequently told to leave Iraqi territory.
The rocket attacks on Camp Liberty on Thursday night reportedly claimed the lives of 23 people and wounded more.

The Fars News Agency reports that Wathiq Battat, the leader of Al-Mukhtar, said in an interview that on several occasions it has told the People’s Mujahedin members to leave Iraqi, and “despite opportunities presented to them to move to U.S. or European destinations, they persist in occupying Iraqi territory”.

Jeysh Al-Mukhtar identifies itself as linked to protests against Saddam Hussein in 1991 and accuses the People’s Mujahedin of collaborating with the government of the time in the crackdown on protesters.

The leadership of the People’s Mojahedin of Iran has accused the Islamic Republic of orchestrating the attack.