Iranian opposition group People’s Mojahedin of Iran has announced that rocket attacks on Liberty Camp, where its members are based in Iraq, have killed 23 of their number. 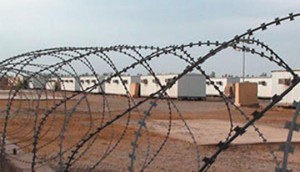 In a statement on Thursday night, the group indicated that 80 rockets had hit the camp causing severe destruction and fires.

The report adds that 22 wounded have been transferred to hospitals in Baghdad.

The UNHCR condemned the attack, adding that it is engaged in relocating procedures for the 2,200 camp residents.

The People’s Mojahedin of Iran were based in Camp Ashraf during the Iran-Iraq War. When the Americans took over Iraq, they also took control of camp security, and when they left, Iraqi authorities called for the group to leave Iraqi territory.

In mediating the removal of the camp residents, the U.S. and the United Nations arranged for their transfer to Camp Liberty until they could be relocated for permanent resettlement with refugee status.