On his latest trip to Iran, German Foreign Minister Frank-Walter Steinmeier visited the Tehran Museum of Contemporary Art and mediated a deal to exhibit a part of its collection in Berlin. 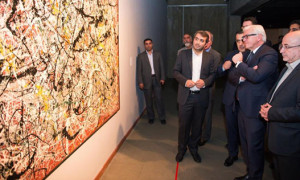 The Prussian Cultural Heritage foundation announced on Wednesday October 21 that the Tehran Museum of Contemporary Art has agreed to loan a part of its collection to be exhibited at the foundation’s museum in Berlin.

Steinmeier visited Tehran Museum of Contemporary Art on Saturday October 17 and acted as intermediary in organizing a show of selected works from the museum’s collection at the National Gallery of Berlin.

Tehran’s Museum of Contemporary Art was established in 1977 by Farah Pahlavi, the last Queen of Iran and wife of Mohammadreza Pahlavi. It has a range of works from impressionism to pop art, including artists such as Renoir, Monet, Van Gogh, Andy Warhol, Max Ernst, Alberto Giacometti and Jackson Pollock.

After the Iranian revolution of 1979, contemporary art was frowned upon, and for a long time the works could not be exhibited or even sold.

The collection is estimated to have a value of $2.5 billion.

Parliamentary speaker to meet Putin at symposium in Russia