The Iranian currency market is in shock with the value of the national currency once again falling against foreign currencies and the dollar trading 150 toumans higher, despite expectations that the prospect of the nuclear agreement would strengthen the touman.

The fall in the value of the national currency is significant because in the past two years the government has consistently tied the economic recovery to the nuclear negotiations and reaching a deal. Now, two months after the announcement of a deal with a flurry of foreign trade missions to Iran and the easing of certain financial and economic restrictions, the public expected a rise in the value of the national currency and a fall in the price of goods and services. 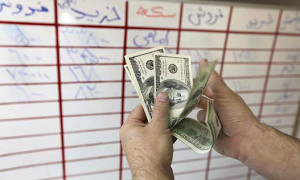 While the government says the increase in the price of the dollar is temporary and insists that it will once again resume its downward climb, government critics accuse it of “manipulating the dollar to remedy their budget shortfall”.

While economic minister Ali Tayyebnia has been predicting that the government will have no budget shortfall, reports from the Rohani administration and its economic advisors speak of budget restrictions. According to Mohammad Ali Najafi, economic adviser to the president and secretary of the cabinet coordination committee, this could be one of the worst years in terms of budget shortfall. He has been quoted as saying that due to the fall in oil prices, the government may face a deficit of 55 trillion toumans.

In addition to the falling oil prices, Iran’s non-petroleum exports have also declined in the past five months. According to Iranian Customs, the volume and value of non-oil and semi-oil exports in the first five months of the year have decreased by seven and 16 percent respectively. Meanwhile, it was predicted that the government would inject into the national economy over $100 billion in assets released from foreign banks following the nuclear deal; however, the government is now saying the assets are closer to $30 billion. Therefore, the general expectations about the market have not been fulfilled.

On top of the government’s manipulations, continued economic stagnation and the lack of activity in other sectors is driving up demand for buying the dollar as a capital good. In contrast, experts were predicting a fall in the price of the dollar and movement in the real estate and auto markets, but a persistent recession and concerns about the budget shortfall and inflation that’s back on the rise are driving the public to invest its money in foreign currencies.

Promises from government officials that next year’s budget will have a single exchange rate for the dollar instead of the current two rates indicate that the rate of exchange for the dollar is not likely to go down. According to this theory, the wandering assets in the market will find their way to the currency market and stimulate demand for the dollar.

Although the rising foreign exchange rate may accomplish the government’s goal of fixing its budget shortfall, the rising dollar will increase the price of imports and manufactured goods, which leaves the Iranian people paying more for goods and services and suffering an overall decline in their purchasing power.