Post Box public sculpture latest to be stolen in Tehran

Another bronze sculpture on public display in the streets of Tehran has been stolen. The Shargh daily reports that on Monday July 20, the 120-kg bronze sculpture entitled Post Box was stolen. The sculpture, which depicts a child dropping a letter into a mailbox, was installed in front of the Postal Museum in Tehran on Imam Khomeini (Sepah) Street. 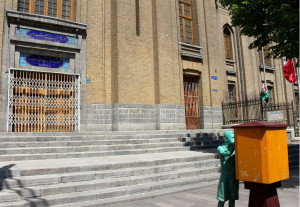 The artist reports that he had offered to install surveillance cameras for the piece and said that he would pay for the costs but the plan fell through.

In 2009, 12 of the capital’s many bronze sculptures were stolen from public open spaces in the city and their fate remains unknown to this day.