Yemen capital was targeted with a blast targeted at the Shia citizens causing 28 deaths. AFP reports that Yemen medical officials reported on Tuesday June 30 that a vehicle exploded in Sanaa in a terrorist attack on Tuesday leaving 28 dead including eight women. 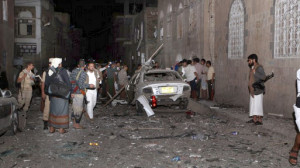 ISIS issued a statement on the Internet claiming responsibility for the blast saying they had attacked “a Shia nest in Sanaa”.

A report form a local security official indicates that the blast occurred at the home of Faisel and Hamid Jiyash targeting Houthi Shia leaders adding that a large group of mourners were gathered there at the time of the explosion for the funeral of two brothers in the family.

Yemen’s Saba News Agency reports that Houthi military has successfully fired a scud missile toward a Saudi military base. The report indicates that the missile is a response to the intensification of attacks by Saudi forces in recent weeks.

Saudi Arabia has not confirmed the attack from Houthis on its base.