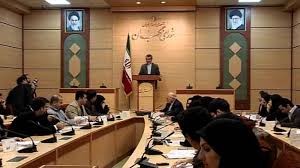 IRNA reports that the provisions of the bill were passed in Parliament on Tuesday, and the Guardian Council ratified the bill today, June 24.

The Guardian Council approved the bill despite the criticism it drew from the administration. A foreign ministry spokesman said yesterday that the bill is not helpful to the negotiating team.

The parties involved in the nuclear talks in Vienna are supposed to bring the negotiations to an end by June 30.

Iran wants all sanctions to be removed as soon as the agreement is executed.

A recent report on AP indicates that the draft is coming along too slowly to meet the deadline.

Iran’s newly approved bill requires that the nuclear agreement include assurances that sanctions will be completely removed when the deal takes effect. It allows for standard international inspections of nuclear facilities but forbids any access to non-nuclear military facilities, documents and scientists.

The bill says the agreement must not in any way restrict the peaceful development of the country’s nuclear technology.