Tens of thousands of fish have washed ashore on Kish Island in southern Iran, and the Department of the Environment says petroleum pollution and red tide are to blame for their deaths. 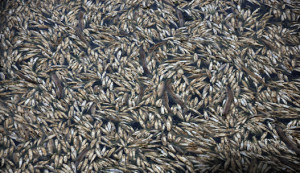 Davood MirShekar, the head of Maritime Resources for the department, told the Mehr News Agency on Saturday May 16 that red tide in the region, the dumping of rotten fish by Shilat fishing ships, as well as petroleum-related pollution are the most probable reasons why the fish died.

Red tide is characterized by a rise in the population of toxic, naturally occurring, microscopic plankton and often occurs when there are warm surface temperatures, a high nutrient content, low salinity and calm seas.

The explosion of the plankton population, while toxic, also decreases the level of oxygen in the water, killing maritime life in the region.

The hordes of dead fish washed ashore have had swollen eyes and red bodies.

Asked about any history of such an occurrence Mirshekar said, there has been no study of Maritime Life in the region recording their population increases and drops; adding however that lack of attention to sustainable development in the region may be cause of greater catastrophes in the maritime ecology.

One female allowed into stadium to watch Iranian soccer favourites