Saudi Arabia has accepted the U.S. call for a temporary ceasefire in Yemen to assist civilians affected by the Saudi air strikes. 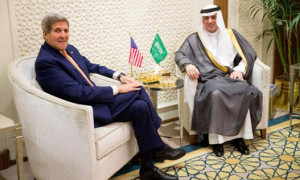 On his trip to Saudi Arabia, U.S. Secretary of State John Kerry discussed the situation in Yemen with Saudi authorities, according to AFP. On May 7 he urged them to cease their attacks to allow humanitarian aid to reach Yemeni civilians caught in the conflict.

Kerry arrived in Riyadh on May 6 and met with Prince Muhammad bin Nayef, the Saudi Minister of the Interior. On Thursday, the U.S. Secretary of State met with Mansour Hadi, the Yemeni president who has fled to Saudi Arabia, and later met with his Saudi counterpart, Adel Jabir.

Following their meeting, Jabir attended a joint press conference with Kerry in which he announced they can agree to a five-day ceasefire to allow the delivery of humanitarian aid in coordination with international organizations.

The United States has supported the Saudi-led coalition against the anti-Hadi forces in Yemen.

Iran has continuously called for an end to Saudi air strikes on Yemen and the establishment of all-inclusive negotiations to resolve the conflict.

The UN has described the situation of civilians caught in the Yemen conflicts as “catastrophic”, adding that a lack of fuel has seriously hampered the distribution of humanitarian aid and the adequate functioning of hospitals.

According to UN reports, since the beginning of Saudi-led air strikes on Yemen, 1,200 civilians have been killed and at least 300,000 people have been displaced.